Skip to content
*We strive to help you make decisions with confidence. This post and site may contain affiliate links, which means we may receive commissions if you purchase through links provided (at No extra cost to you). Our opinions are our own.

Whether it’s on YouTube, TikTok, or Instagram, you’ve probably seen videos of this guy in the past few months: Andrew Tate is also known as Cobra Tate.

When I initially heard about him, I figured this would be a fun video to make lots of ridiculous clips of him saying the most outlandish things, but the deeper I looked, the more disturbing and just plain evil things I found.

Tate seems like he popped up out of nowhere. 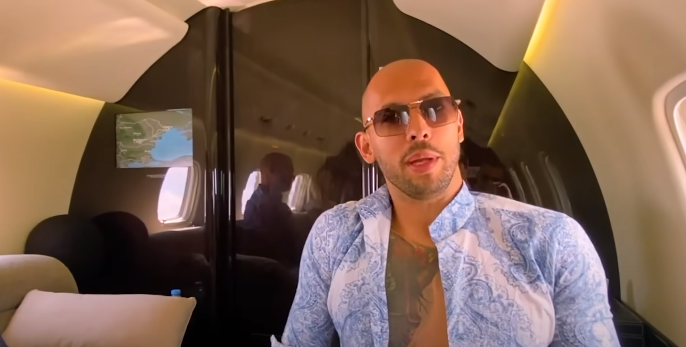 I’m getting tons of comments from people asking me to take his course.

He now has a dedicated following, and he has been blowing up these past few weeks with dangerous, out-of-pocket things.

The man is flexing and that’s the thing any fake guru does. They can rent a Lambo and act rich. I want to dive deeper and see what’s really going on here.

Is this guy, the new Tai Lopez?

Is he just the scammer?

Is he the sigma male business mogul that he claims to be?

Mr. Cobra Tate even has a secret illuminati type alpha male group that you can join, that is, for $5,000, of course, as well as just all kinds of different programs.

So I want to join one or two of them and get to the bottom of Mr. Bugatti.

Watch this video by Biaheza review of Andrew Tate.

Who is Cobra Tate?

Apparently, he’s a kickboxing world champion. So that’s where he got his money. That’s a legitimate sport and there’s money involved.

You can’t fake being a world champion; there are videos of him competing and he said he made all of his money through being a kickboxing world champion.

How did he make his money?

Bad guys, mafia guys, these kinds of people are always involved in these industries because they like the idea of sitting at the table and being involved with fighters and being friends with fighters.

They have a lot of money and a lot of their money is involved in promotions and money laundering.

He has a bunch of different courses and programs, one of which is a ”how to talk to girls” type.

He said before he got rich running an adult webcam studio and that half of his employees at the studio have previously dated him.

Why would you say that then he decides to go into even more detail and it just keeps getting worse.

He goes on to publicly state that he would get women to fall in love with him to the point where they would do anything for him, and then he would get them into the adult industry his webcam studio.

I know this is going to come off as a surprise, but I’m actually not a lawyer But what Mr cobra just stated here sounds a tad bit like coercing people in order to benefit from their work, typically in the form of a certain type of exploitation.

And this gets even more cynical and there’s another level of shadiness here because he then publicly admits that he uses all these women to scam people out of tens of thousands of dollars.

I think it’s kind of one of those where a woman will tell somebody online that ”I want to move out and marry you, but you gotta pay me four dollars per minute to talk to you” type of scams.

Now I don’t know if people just aren’t aware of this or they choose to ignore it, but even though everything that I just mentioned is completely public information, he still has a cold dedicated following that even defends him in any video.

Given his past history of business moves, it’s not too surprising that, according to a Romanian news article, his home was raided by Romanian police.

There was a report that an American woman was being held captive at the state house, police found both the American and a Romanian woman in the building during the raid.

I don’t think he’s technically arrested, so all of these accusations are alleged and his response is that these women were lying.

I don’t know if the police did raid his home and find the woman that they were looking for, but I don’t know the intricacies of the case.

He moved to Romania because Romanian police are less likely to investigate allegations like these.

His apology video and Instagram post of a staged interrogation room were all attempts to make amends.

The comments are insane.

What is Biaheza’s Experience with Andrew Tate’s Hustler’s University Courses?

As far as his courses, I was planning to join his war room secret, an alpha male group for $5,000 to see what’s going on.

They claim to give access to a global elite network and just all kinds of crazy things.

People have mainly been asking me to try out his hustler’s university, which claims to teach pretty much any online business you can Think of For $49 dollars a month.

This $49 monthly payment got me access to a Discord server where I began by choosing whether I have no money, no time, lots of time but no money, or a different variation of this. 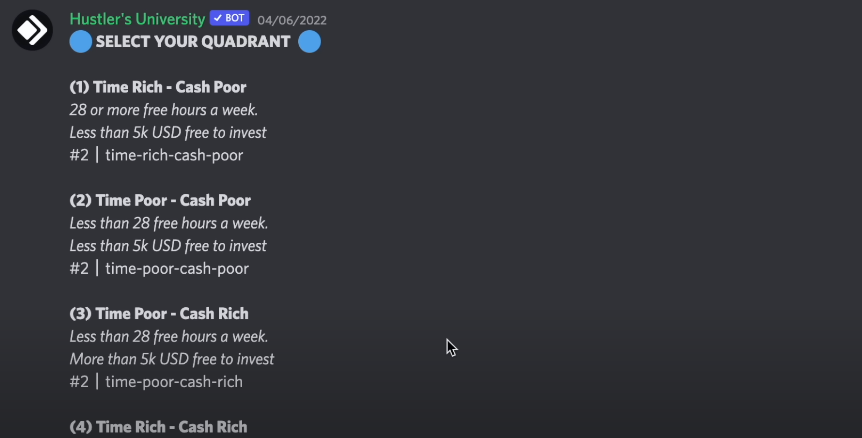 I chose no money, but a good amount of time, which then granted me access to courses for a few different business models.

Out of the list of options, I chose the drop shipping business model because it’s one that I have expertise on

I kind of figured it wouldn’t be Tate teaching me dropshipping and teaching all these different courses himself, so I wasn’t too surprised when it was just some random person, I’ve never heard of.

and I also wasn’t expecting the extremely high production quality, paying $49 a month for 20 different courses.

The drop shipping segment ended up being five videos.

There were some screen recordings for the website, building, and Facebook ad portions, but for most of it there was just this basic PowerPoint presentation with a voice-over behind it. 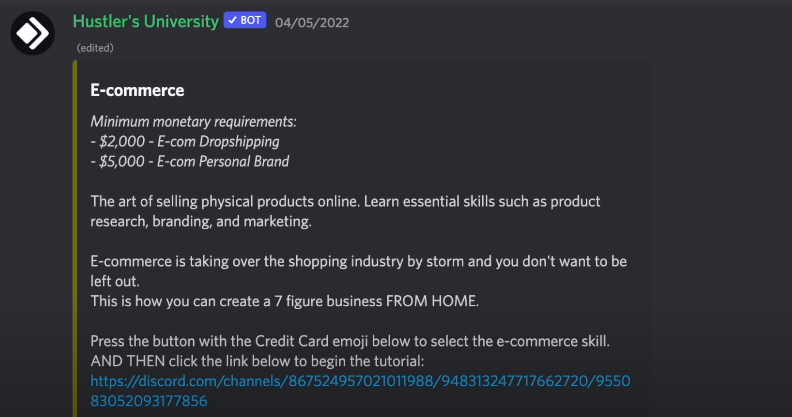 And the voice-over sounded like it was done through a laptop microphone, and we never even really got to see the person behind the voice. It was a decent, basic overview of dropshipping a website.

They ended up teaching you how to build something that isn’t really high quality, nothing on new forms of marketing like TikTok.

I feel like if I hired somebody on Fiverr to make me a drop shipping course, this is exactly what I would get.

I looked through the other courses on business models and I can’t judge the information inside of them because I’m not an expert in those fields, but quality-wise, it was kind of the same thing: either a PowerPoint crusty video of someone just recording themselves through a laptop webcam.

What is the Biaheza Final Advice on Hustler’s University?

I guess at $49 a month you’re not getting a complete scam If you join for a month to view all the videos.

I’m an extremely strong proponent, of finding a single business model that’s legitimate, stick with it long and hard enough, and you can succeed with any of them.

I think the structure of this program would encourage people to jump between different business models, which is a common problem that leads to a majority of people never succeeding with any of it.

So if you want to get an intro and an even better understanding of any of these business models, you can do a better job of that for free on YouTube.

And after doing that, if you decide you want further guidance or a step-by-step type of course, I’d look for one specifically about that business model Coming from somebody, you researched or read beforehand.

On Andrew Tate Himself 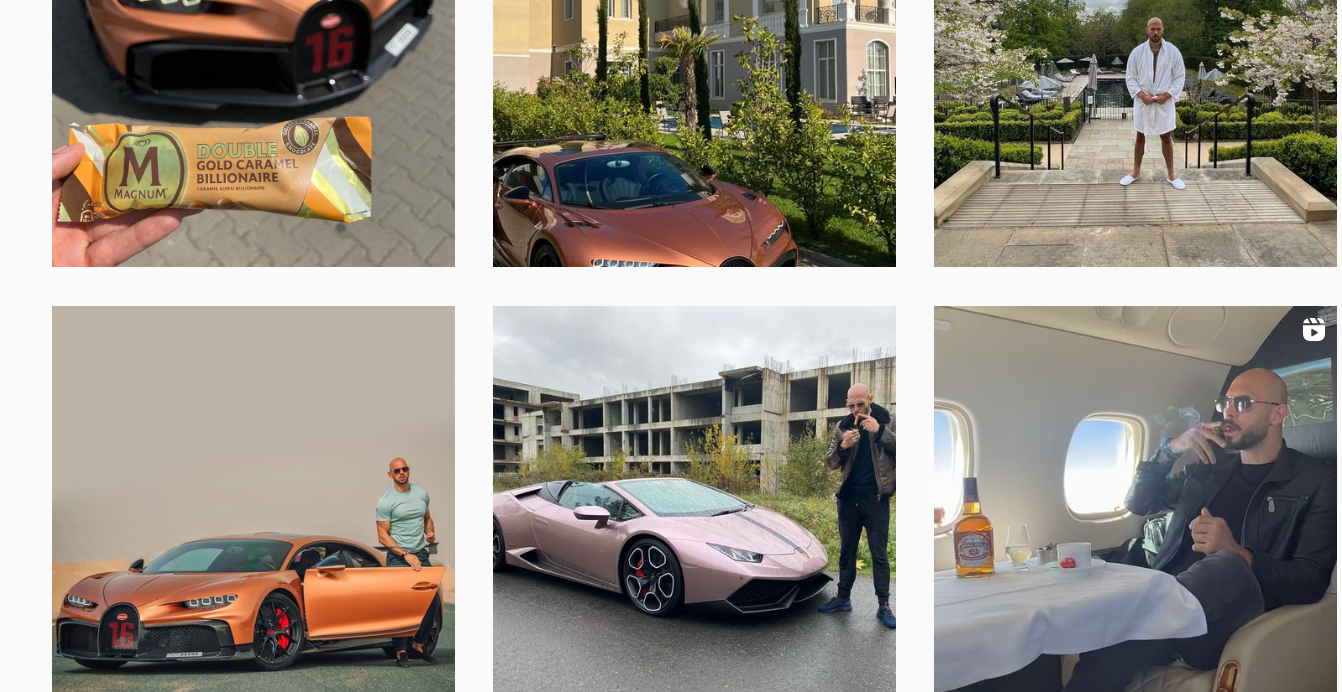 Outside of his potentially illegal schemes and activities, Andrew Tate is a troll, and I have to respect that aspect of him, as well as his ability to speak his mind freely.

People are too afraid nowadays to say anything wrong or anything that could be deemed politically incorrect, which is why I think people are drawn to Tate in the first place.

But that said, cobra is not someone I would take advice from and definitely not someone i would buy a course from If I was looking to learn about marketing, e-commerce, amazon, phobia or any online business.

He puts on a show and acts up for attention.

If you’re seriously looking to learn about any online business that isn’t exploiting women, I would look elsewhere.

This user on Reddit makes a good point. He says: 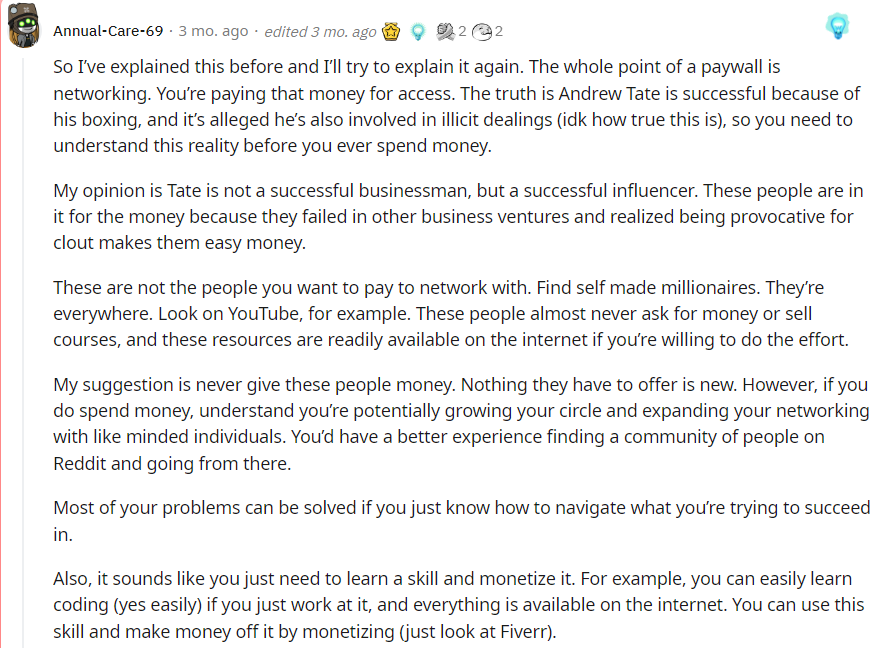 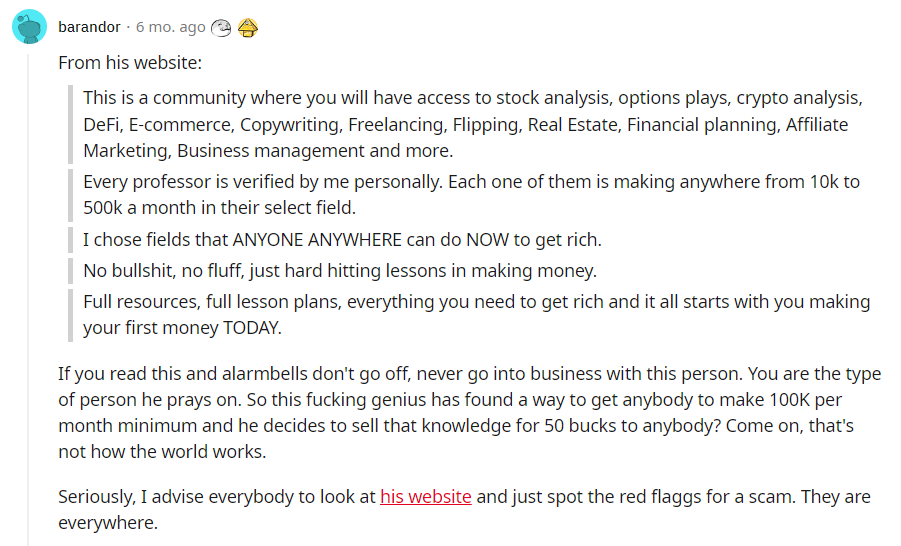 Another Review of a User making $9,333 per month

Here is another take from someone that makes money from affiliate marketing.

So different people have different experiences. Just be careful!

Baobab is the MMS Experience creator and an experienced content creator with years of crafting high-quality content across different platforms with a mission to empower others. He also owns the YouTube channel called "Freetrepreneurs" and the Instagram page called @lions.royal. Email: themmsexperience123@gmail.com